What’s in Rochester, NY that is in the top five for being the longest? Oh, I can hear the jokes and comments through my laptop speakers. Keep it clean, people. Alright, keep it dirty. At number four is the Charlotte Pier, measuring 721 meters, which equals 2,366 feet, its original foundation laid in 1829. I used a list provided by Panethos.com to make the comparison, who ranked 116 piers by size in the US. Pronunciation Note: Rochesterians say, /SHar lot/

The Port of Charlotte, originally known as the Port of the Genesee River, was a destination resort up until 1949, as well as a major international trade depot. Its popularity can be traced as far back as 1820, when it welcomed 316 ships. On June 14, 1869 Charlotte incorporated as a village in the town of Greece. It’s speculated that at this time the name changed to the Port of Charlotte.

On May 12, 1853 the Rochester – Lake Ontario Railroad began transporting goods and people to Charlotte. This railroad played a pivotal role in the development of Charlotte as a summer resort. It became an international hub catering to Canadians, who wanted to visit Rochester and then travel to New York City. Demand was high for Charlotte to expand further. The influx of wealth drove the openings of two yacht clubs: the Genesee Yacht Club (1874) and the Rochester Yacht (1877). The first electric trolleys opened in 1889, running from the City of Rochester to Charlotte. The main goal of trolley transportation was to fill Ontario Beach Park, which opened in 1884.

Charlotte introduced another attraction in 1905, the famous Dentzel Carousel, which attracted thousands of visitors, who waited in long lines to ride its handcrafted horses. The Ontario Ferry Company introduced four ferries starting in 1907 due to rising demand; the Ontario I, Ontario II, the Kingston, and the Toronto. The ferries further expanded the resort village and international trade.

By 1949, Rochester had given up on Charlotte and focused all its resources on the Genesee River, hoping to expand the already functioning flour mills. This created an influx of people moving to the City of Rochester and put the final nail in the coffin of the expanding resort area. Oddly enough, the politicians and business owners in the city made a grave error. They didn’t foresee the decline of the flour mills and suburbanization, which left the city desolate and forced companies to expand to the suburbs. Although Charlotte was a suburb at the time, its redevelopment fell wayside among battered sails. 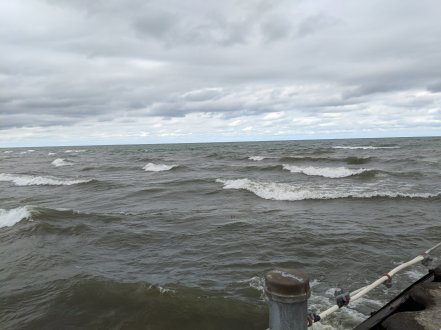 Thank you to https://www.charlottecca.org/living-here/charlotte-history/ for supplying some of the info in this article.