Go get a garbage plate now! I know you want one because I do.

The Grecians, known as the Greeks to America, have donated the world many inventions. To name a few: philosophy, geometry, cartography, the Olympics, the odometer, and yes, the Garbage Plate. The Greek community thrives in Rochester, New York, devoted to their heritage and culture, which is evident by their well-known communal gatherings, the Greek Festivals. Their celebratory spirit is bar none with choreographed dancing and delicious foods. 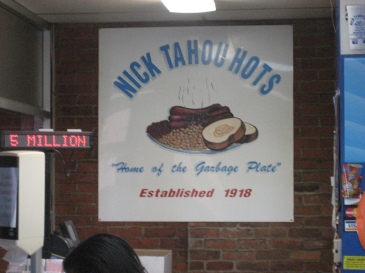 Nick Tahou Hots, a Greek establishment, brings us one of the tastiest mishmash of flavors. First, let’s address the name Tahou, so you’ll be able to pronounce it properly the next time you walk through their doors. Tahou /Tah who/. Please have someone update the Wikipedia page to show the proper pronunciation with the proper symbols.

Now that we have that out of the way, let’s move onto the food and a little history. The original restaurant opened in 1918 and it was called Hots and Potatoes. Alexander Tahou was the owner and eventually opened Nick Tahou Hots, which was named after his son. It is located at 320 West Main Street, 14608.

A rite of passage for many Rochesterians, the Garbage Plate, offers a spicy meat sauce, which they will add extra for you, at no charge, to smother the contents of the plate. Underneath the hot sauce, you have the option of two hot dogs, two cheeseburgers, or two hamburgers plus two combined sides to mix and match; beans, either French fries or home fries, and macaroni salad. Chopped onions come standard atop the plate. Don’t forget to add ketchup and mustard. Two pieces of bread and butter go along with the plate so you better make extra room in your stomach. One note about the sauce; in Rochester it is referred to as hot sauce. In any other part of the country, the term hot sauce means something completely different.

You can make the meaty hot sauce yourself, but it’s not as it easy as just mixing the ingredients. The process takes a lot of time. I’ve made it several times and it’s a learning experience. Whoever tells you that they made it and it tastes just like Tahou’s is lying to you. The most important advice I can give is to add lard instead of butter. Lard doesn’t coagulate at high temperatures whereas butter does. It’s all on the molecular level, which you can Google on your spare time.

The Garbage Plate has been featured on many TV episodes, especially on the Travel Channel and Food Network. It is rumored that many stars have eaten at Nick Tahou Hots, but there are no pictures on the walls to prove it. The restaurant seems to want to keep everything low key. The one that sticks in my mind was Ozzy Osbourne during the late 80s or early 90s. Enjoy your next plate and don’t forget that it started in Rochester. Extra hot sauce, please.